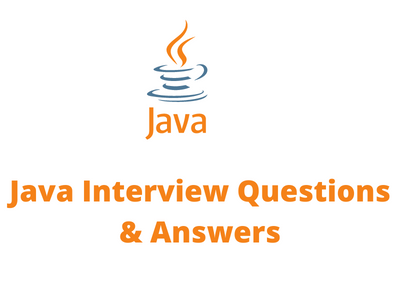 Java is one of the highly used programming in The World. If you are searching for the Java Interview Questions and Answers, then you visited the right place. More than 1 billion devices in the World runs on Java. So its most popular language used in the World.

Who Developed the Java Programming language?

Java was developed by James Gosling in 1991.

What are the feature of Java?

By asking the feature of Java, Interviewer wants to know whether you about Java or not. Let’s see some feature of object oriented language Java.

What is classpath in Java?

JAVA_HOME and path are two variables which needs to be set to run Java program.

How to save Java program file?

Java program file is save with .java file extension. After you done the java coding, file will be saved as .java extension.

What is the parent class of all classes in Java?

Object class is the parent class of all classes in Java. Object class has various inbuilt methods.

What is the parent package of all classes in Java?

Java lang package is the parent package of all classes in Java.

Access Modifier specify the scope of the method, class, constructor, variables on which they are applied.

There are basically four types of Access modifier in Java

What is class in Java?

Class in Java is the template to create an object. In simple terms, It provide the structure so that objects can be created.

What is method in Java?

method is a group of statements or line of statements to perform some operation. Method in Java execute the java code written inside when it is called.

What is the entry point of a program in Java?

Main() method is the entry point to execute the java program.

What is method overloading in Java?

In method overloading two or more methods having same name and same return type but difference is only of parameters provided.

What is method overriding in Java?

In Java Method overriding, both parent and child class has same method with exact same everything, but child class method is called.

What is the use of a constructor in Java?

What is the use of a new keyword in Java?

Here we created the object of class Person with the new keyword.

What is the use of static keyword in Java?

When static keyword is applied to variable it become class level variable. static variables can be access anywhere in the class.

What is variable in Java?

Can main method be private in Java?

No, main method can not be private in Java.

We can declare main method as private, it will compile successfully, but when it was executed at runtime, it throws exception.

Can main method be overloaded in Java?

Yes, we can overload main method in Java.

Can main method be overridden in Java?

No main method can not be overridden in Java.

Can main method return any value in Java?

Can main method be final in Java?

Yes, we can make main method as final in Java.

can main method be non static?

No, main method in Java can not be non static. if declared, it will throw error.

Why main method takes only string arguments in Java?

Its the standard format of Java main method that it will take only String array argument. if we try to put other than String argument, It will throw error.

The reason of taking only String arguments other than others data type could be that String is very versatile datatype. Anything can be converted from String.

What is Strings in Java?

Strings are class in Java. we can create object of String class. Strings in Java is immutable, once created Strings ca not be modified. String is also a data type in Java.

Can we declare class as final in Java?